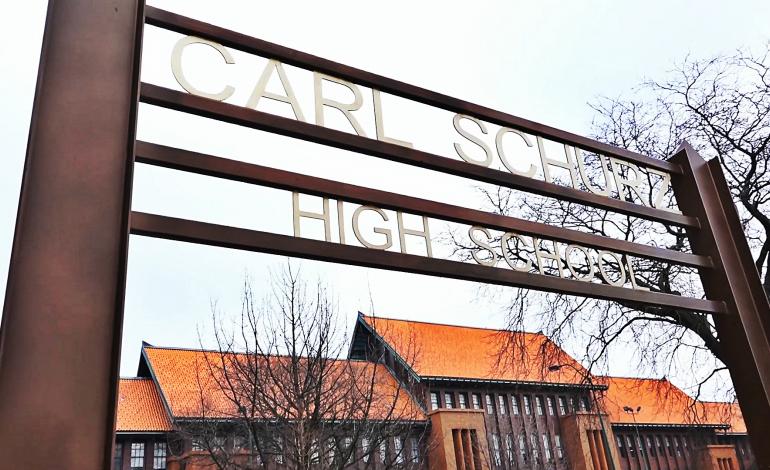 Joining IPRAstrong was Chicago native Andrew Openlander. Andrew is the creator of the Andy’s Box, a modern ghost hunting device which scans through radio stations and allows spirits to speak in real time. Andy began building boxes a few years back when he became deeply involved with paranormal investigating involving the use of ghost boxes. He struggled to find a device which met his standards of audio quality. Using his twenty years of electronic technician experience, Andrew created a new breed of spirit boxes. When asked about his plans for the future Andrew responded, “Three years later I’m still building. Still making improvements in order to make the best ghost box I can….” The team was very excited to use the box during this investigation.

The halls were dark and quiet as the team began their investigation in the school’s ample library. Andrew flipped on his personal ghost box and began asking questions. Andrew asked the spirits how many of them were present. Within seconds a clear response replied “SIX.” The same voice returned moments later calling itself “Stephen”. The team double checked the spirit’s response by asking “Is your name Stephen?” They were instantly satisfied when a spirit quickly responded “YES!”

After receiving several more intelligent and direct spirit responses using the Andy’s Box, the energy in the room changed drastically. The investigators immediately noticed a change in responses coming from the box. What started as calm and respectful responses turned into scary answers and even a threat. A spirit came through asking the team, “Are you listening?” and shortly after stated “I’m sick.” The team became intrigued as to where the spirit may be speaking from so they asked, “What does it look like where you are at?” The spirit loudly responded, “HOT!” After several more questions Andrew asked, “Is there anything else you wanna tell us?” A very angry sounding spirit quickly answered his question by yelling, “Fuck you, I’ll kill you!”

Sometimes a ghost box session is performed and the answers which the box speaks are truly incredible. Alot of people dispute ghost box results stating that they are merely an electronic “magic eight ball.” To understand how spirits work you have to know what you are listening for. A seasoned paranormal investigator will be able to tell the difference between a radio transmission and a spirit attemtping to make contact. Notice the loud “helicopter blade” sound as the box rapidly changes from station to station. You will hear snippets of different radio stations as the box keeps scanning. When a spirit decides to answer, it is normally very soon after the question is asked. Pay attention to the voice and the person who may be attached to it. Is it a male or female? Does the voice have an accent? Is the spirit happy, angry…curious? When in a direct conversation with an intelligent spirit, the same voice will respond to the investigator before the box even has time to cycle back to that station! What does this mean? If the spirit’s voice and answer were coming from 94.7FM, the box would have to scan through all of the other stations before returning to 94.7FM and hearing that same voice again. Except, during an intelligent conversation, the spirit will speak OVER the clicking of the stations and respond sometimes in full sentences. Another thing to listen for when performing box sessions is profanity. We have had countless spirits tell us to “go fuck ourselves.” Profanity such as this word is not allowed on the radio.