Could this strange corpse be the world’s first proof aliens have visited Earth?

Paranormal investigators are calling for DNA tests to be carried out on a bizarre corpse that some believe could be the world’s first alien dead body on Earth.

With its tiny winged frame and reptilian face, the “dead alien” has all the hallmarks of an elaborate hoax, but some alien investigators believe it could be the real deal.

Author Brian Foerster claims to have found the unusual winged small humanoid corpse in a specimin jar in an office in Mexico earlier this year.

Claims are now being made in a video clip online that X-rays carried out on the “dead body” have shown a skeletal structure inside, leading to calls for further analysis, including DNA tests.

But there have been claims the clip entitled “What is this weird creature with wings in this jar?” could be an online money spinner, because the clip promotes a website where viewers have to pay to see the full documentary.

In a promotional blurb for the video clip, Mr Foerster wrote: “I saw this very odd animal in an office in Mexico City in January of 2016.

“As a trained biologist I have a hard time thinking it is fake.“What do you think?”In the clip, which appear to be highlights from a longer documentary, LA Marzulli, an author and filmmaker, is seen investigating the discovery.

He meets with Mexican paranormal journalist Jamie Maussan, who says: “It is a hybrid, and that is something very important, because i believe these are confidential experiments, and why I don’t know.

“But we have a physical body. We can analyse that physical body and prove that something, an intelligence, is behind these experiments.” 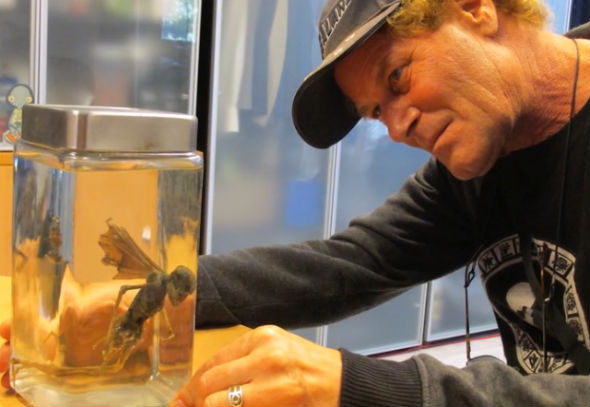 Brian Forester with the odd “discovery.”

Mr Marzulli is then seen with an unnamed man in a white lab coat with glasses, who viewers would assume was a scientist.He says: “It has wings. We have an X-ray of this creature and we can see the structure of the bones.Mr Marzulli asks him: “So this is not a hoax, because an X-ray would show if it was a puppet or a mould?”

UFO blogger Scott C Waring, of ufosightingsdaily.com, is very excited, referring to it as a fairy, and would like to see DNA testing carried out.

He wrote: “Here is an interesting creature that was caught in Mexico and placed in a jar in a museum.

“It is well known that aliens could be any shape and size, even of tiny insect size with genius IQs.

“Intelligence has no limits. This discovery in Mexico of this fairy is very human-like in appearance, and does look real.

“I wish we could get a DNA analysis of this creature to back it up.”

There have been a number of historic claims of alien creatures being found in the past, when mysterious corpses were produced.

Further tests have found them to be complete hoaxes, or made using the corpses of various earthly animals literally stitched together.